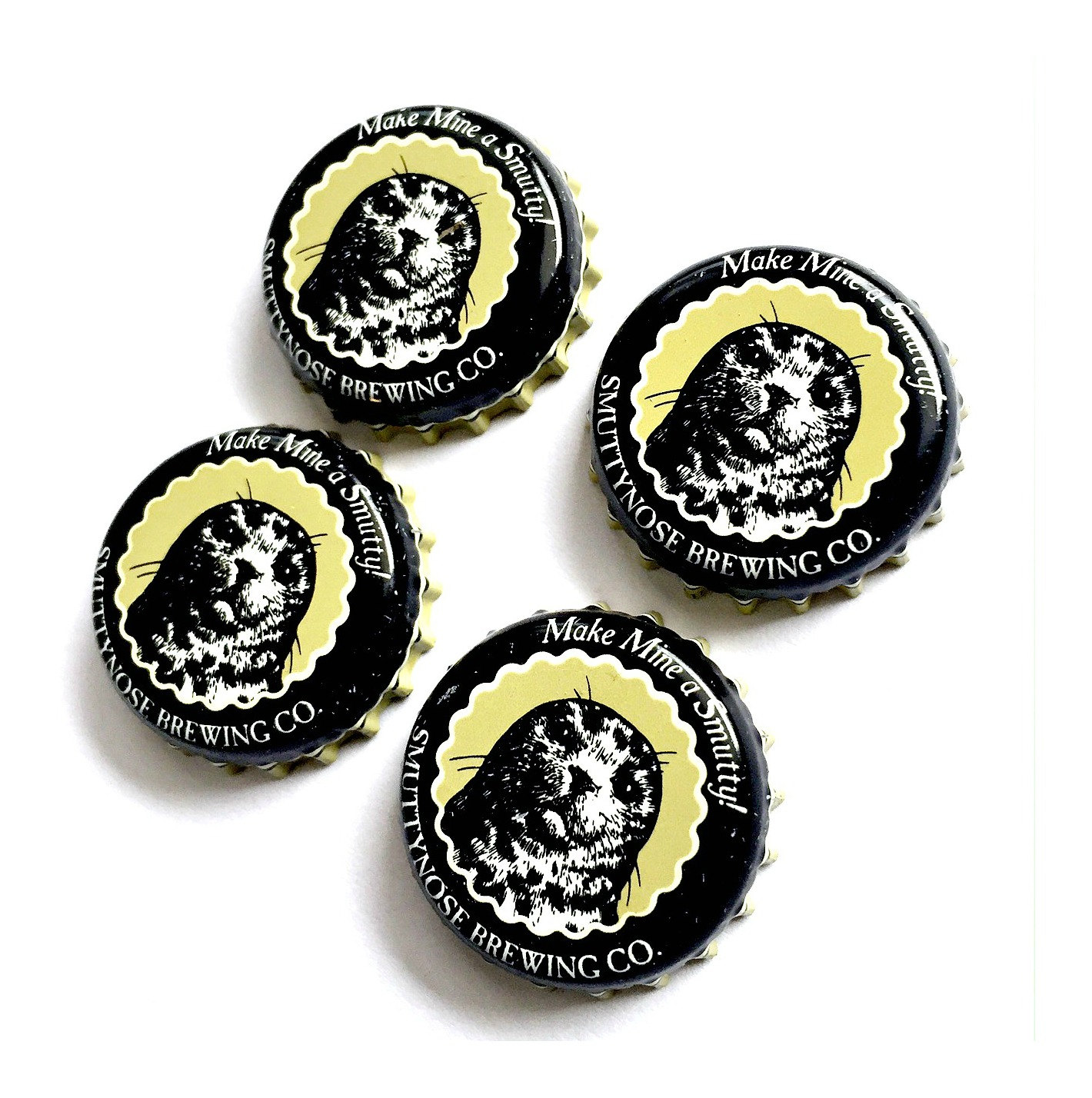 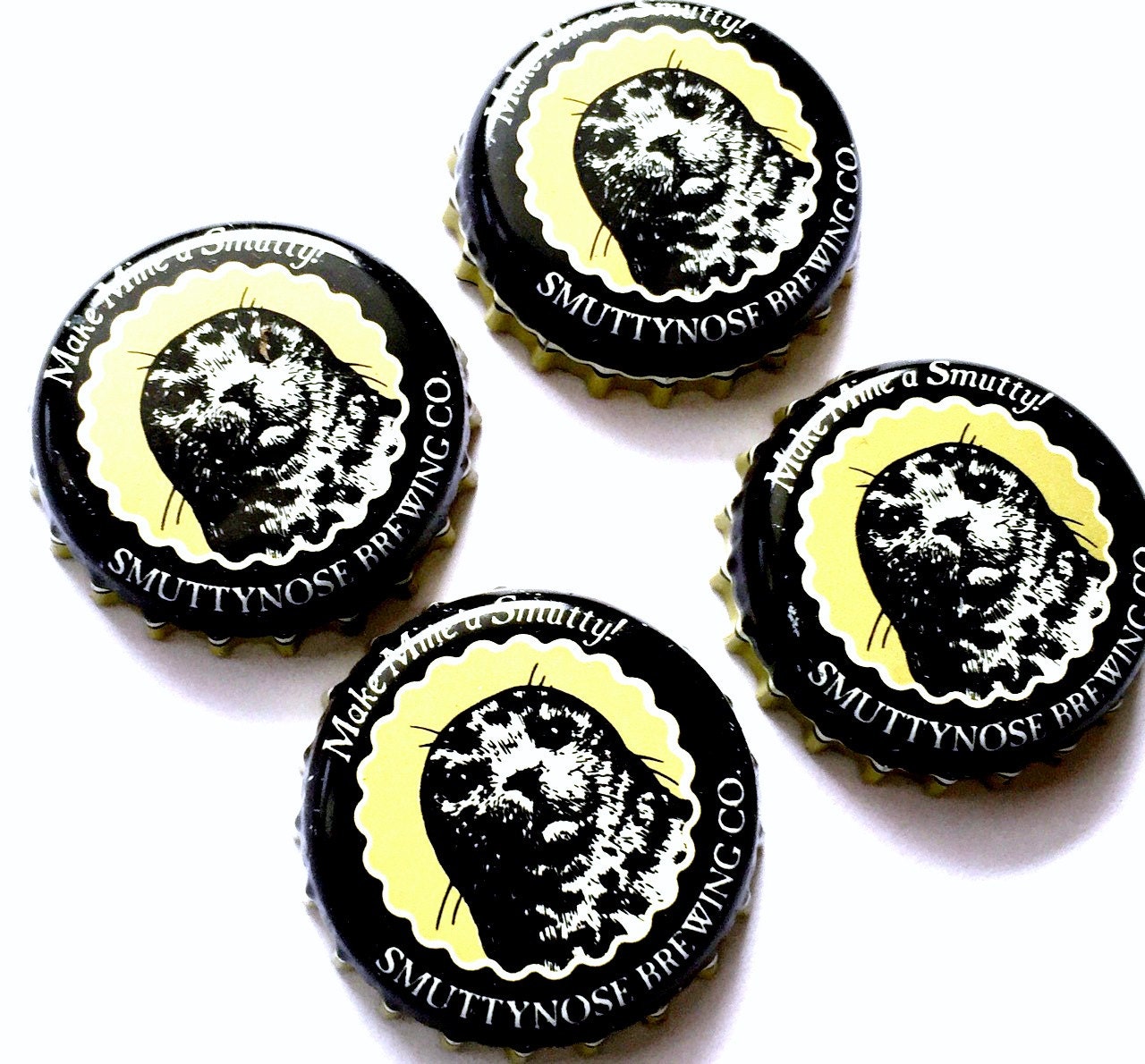 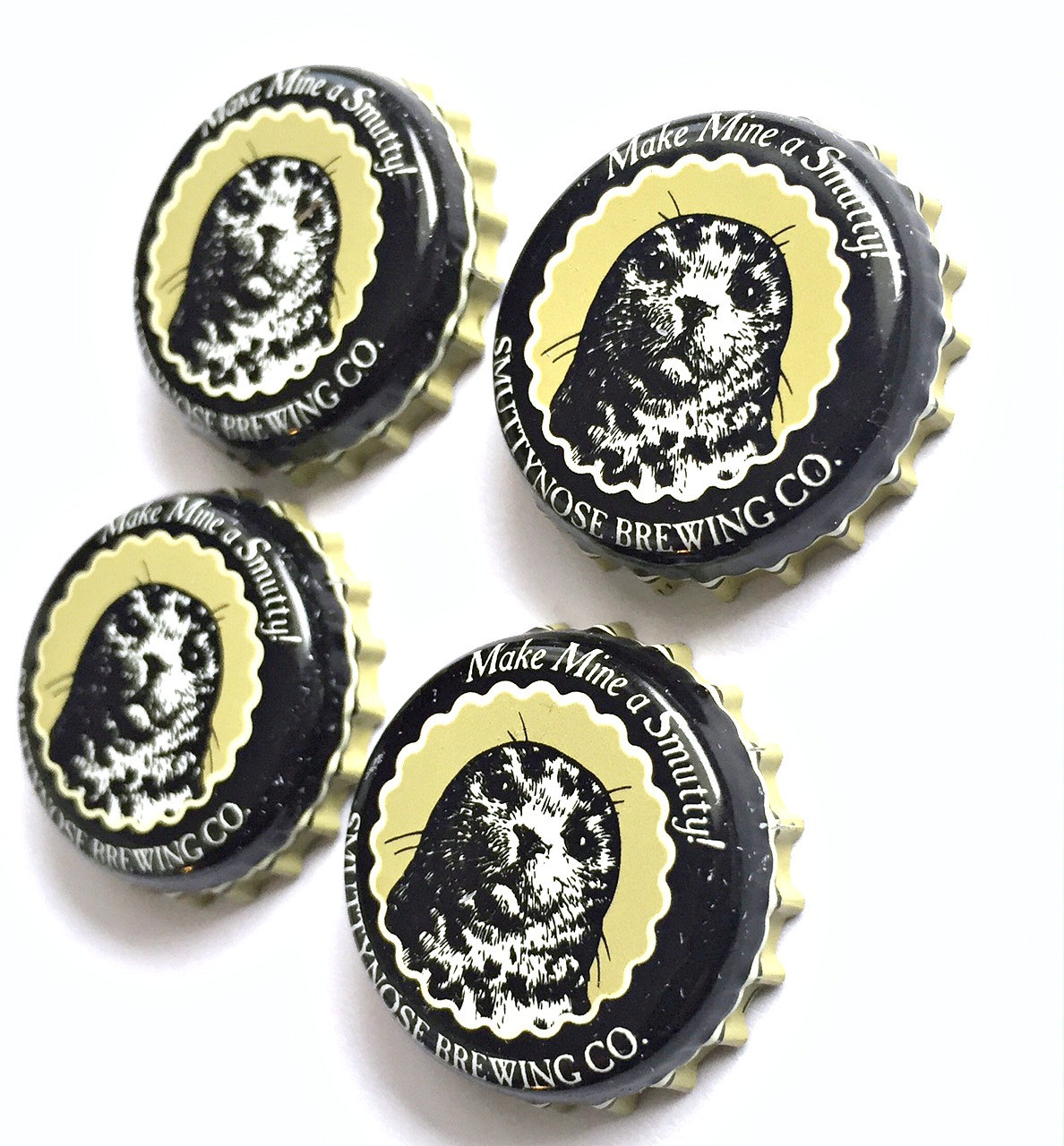 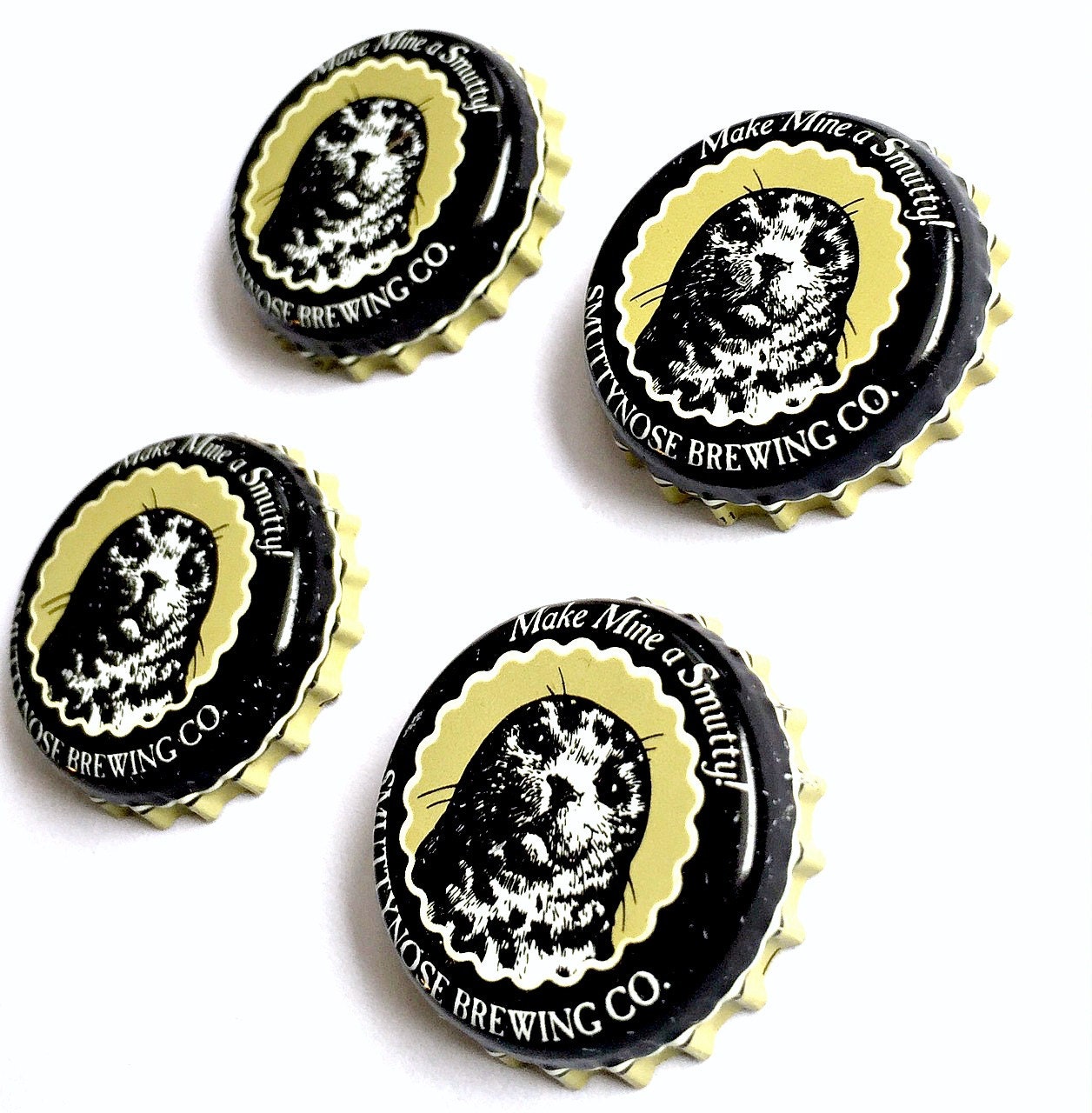 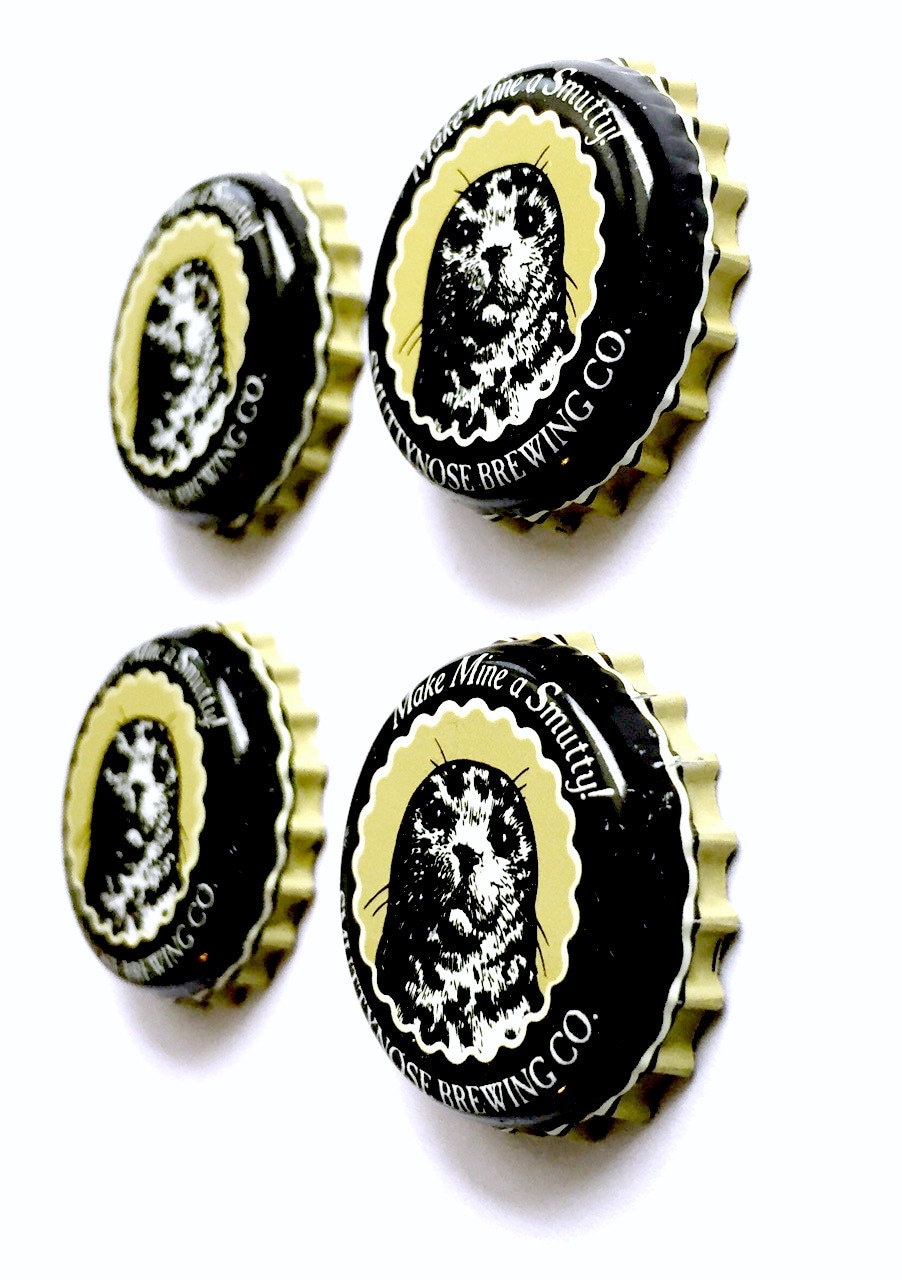 This set of four beer cap bottle magnets are from the Smuttynose Brewing Company, located in Hampton, New Hampshire. An unusual name for a brewery, eh? From their website: "Founded in 1994, our company is named for Smuttynose Island, the third largest of the nine islands that form the Isles of Shoals, a small, rugged archipelago that lies seven miles off the craggy New Hampshire coast. The name Smuttynose appears on nautical charts from the seventeenth century, but its origins have been lost to time. Over the centuries the Isles of Shoals have been home to pirates and poets, ghosts and fishermen. In the 1870’s Smuttynose Island itself was the scene of a notorious double axe murder. Today, it is peaceful and desolate, a windswept haven for harbor seals and seagulls whose stillness belies its colorful and sometimes violent history." Each cap has a black background, with gold in the center featuring a seal, along with the words "Make Mine a Smutty!" and "Smuttynose Brewing Company". There's a nice strong magnet attached to each. What a fun gift, addition to a collection or to add to the dorm or bar fridge.
****************************
See more items in my shop:
https://www.etsy.com/shop/MashedPotatoMosaics

Thank you for stopping by!

I'll do my best to meet these shipping estimates, but can't guarantee them. Actual delivery time will depend on the shipping method you choose.

I gladly accept returns and exchanges

Ship items back to me within: 7 days of delivery

But please contact me if you have any problems with your order.

The following items can't be returned or exchanged

Because of the nature of these items, unless they arrive damaged or defective, I can't accept returns for:

0 items in your cart